Backing up Office 365 to an on-premises server!? – iTWire

GUEST OPINION: I’ve been working with Office 365 for a loooong time (over 10 years if you include my time with its predecessor, BPOS) and the topic of backups has come up many, many times.

Microsoft sellers will tell you that it’s not required because features such as retention policies and unlimited archives render to make the need for backups redundant. I’ve tended to agree, however understand where some organisations have a regulatory requirement to keep backups in a separate environment. This is especially the case in government, however, is becoming less and less enforced.

The issue with backing up Office 365 is that there are too many services that don’t offer API access, and therefore one can never truly back up the platform. So, when vendors claim that they can back up “everything” in Office 365 – it is a categorically false claim.

And while for regulated organisations, being able to back up as much as they can of Office 365 can sometimes be enough, in the case of small businesses – they just want something they can touch. For many years it’s been commonplace for someone in a small business to take the backup tapes home with them on a regular rotation, so doing away with this when moving to the cloud can be a challenge to accept.

Recently I got my hands on the newly-released Synology DS920+ NAS unit and came across the “Active Backup for Office 365” package bundled with the unit and wondered why such a solution exists, especially given there are so many established vendors in the market such as Veritas, AvePoint, CommVault, and others.

The reality is, that as organisations start moving more workloads to the cloud, their on-premises footprint decreases – but sometimes they still need something to provide functionality as well as give them peace of mind. As a person that has had their head in the clouds for so long, I didn’t realise that NAS units were more than simply “network-attached storage”. They are in fact incredibly versatile servers with a variety of functions and purposes. Whereas small businesses may previously have had one or more Windows servers providing local services such as authentication, printer management, file storage, and application hosting; NAS units have steadily become a suitable replacement for those on-premises servers. Especially as more and more services move to the cloud, the requirement for on-premises infrastructure decreases, but in some cases can take a long time to it fully goes away. This is because the average small business is not necessarily prepared to go full Microsoft 365 E3 (or above) and implement Endpoint Manager, conditional access, cloud printing, and go completely to the cloud; mainly because it’s not their priority both financially and operationally.

The DS920+ surprised me with the amount of functionality it was able to offer in such a small unit. To be honest I kept thinking it was some form of witchcraft, because when you look at the size of the unit and how much space is taken up by the hard drives and other gear such as fans and circuit boards – there’s not much space left for a platform that can offer so many functions that would historically be delivered by multiple servers. 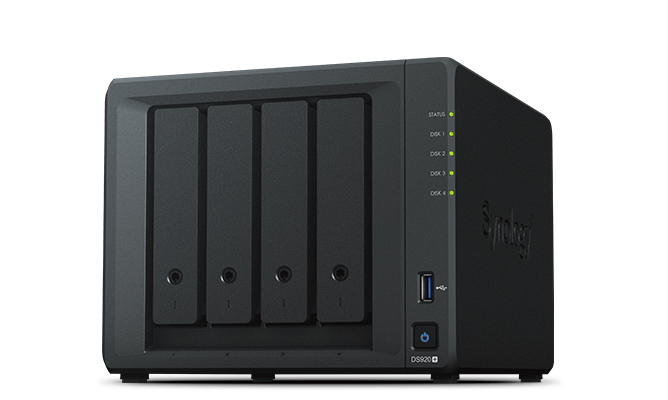 Putting aside the functionality around running virtual machines, serverless computing with Docker, surveillance & multimedia storage, PC backups, and a bunch of others, I wanted to focus on the Office 365 backup promised.

In my personal Office 365 tenant, I run several accounts for myself, my wife, our daughters, as well as having a few Teams and SharePoint sites for various projects and initiatives (an example of this is the recent M365 May event which involved two Teams and a bunch of user accounts). Luckily at my home, I have a sizeable Internet connection of 100/40Mb with unlimited downloads, so backing up my tenant was not going to be a challenge.

Configuring the Active Backup for Office 365 solution is relatively straightforward. Simply connect to your Office 365 tenant with administrative credentials to grant access to the service, then select the content you want to back up. 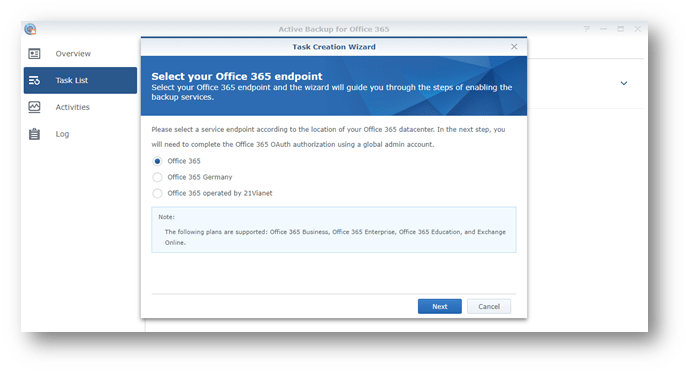 From a content perspective, it is effectively able to only back up an individual’s Exchange mailbox and OneDrive content. I was a bit confused around the terminology of “Drive” where I would expect it to say “OneDrive”, and why contacts and calendars were considered separate from the mailbox itself. Additionally, I was confused as to why “My site” was listed there as this is effectively no longer used in modern Office 365 parlance, and dates back to older SharePoint functionality (while technically “My Site” still exists in SharePoint Online, we really only access the document library functionality which is presented as OneDrive). 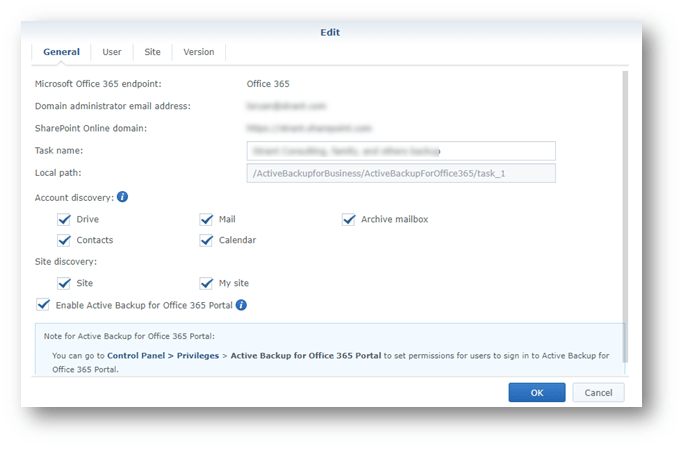 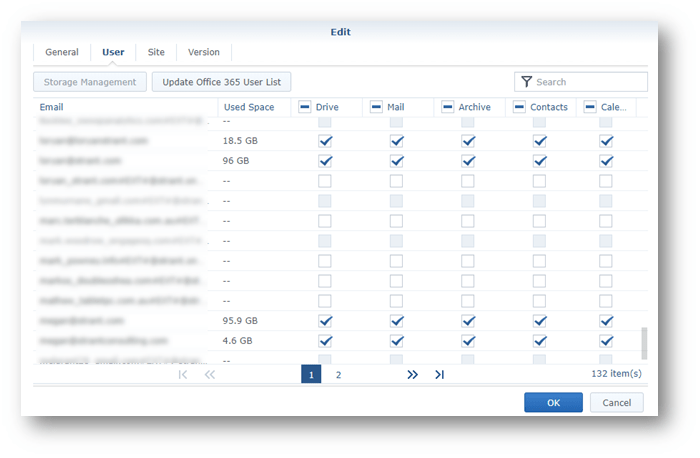 What exactly the service backed up in SharePoint was initially a mystery to me, and to be honest, I expected it to only be content in the document library of the site, however, I was pleasantly surprised when accessing the backup portal that it actually backs up all the content in the site (including hidden libraries and lists). 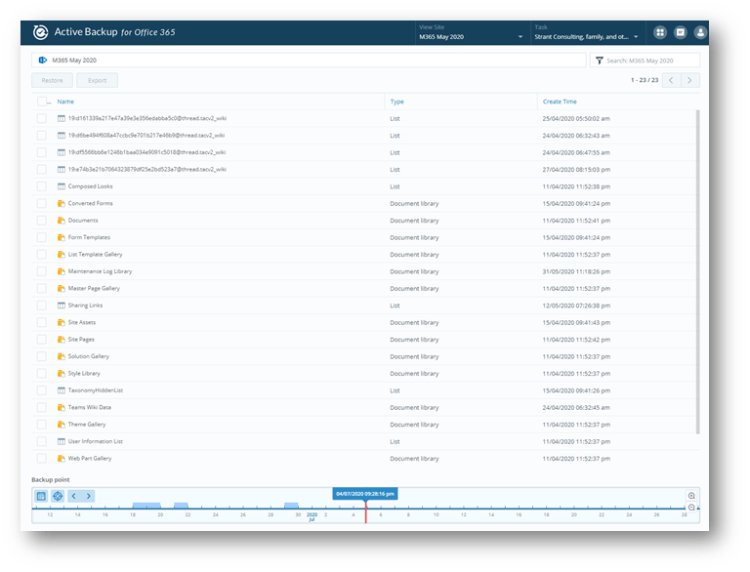 As you can see at the bottom of the above image, it shows when content was changed in the site – and allows me to view the timeline so I can easily roll back to a previous date.

What I do like about the backup portal is that it can be made available to end-users, allowing them to restore their own content – something they would normally need to go through their IT department (or outsourced provider) to get done.

The application itself provides a simple enough glimpse of the backup process and success over time, as well as being able to send notifications for those that need to know. 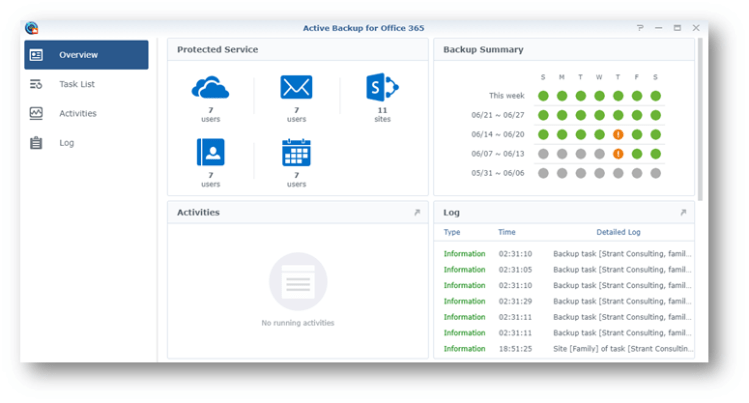 So, the question is why would someone need to use this feature to back up their Office 365 environment? And what’s the point of it given that it only backs up Exchange, OneDrive and SharePoint content.

While the DS920+ can (with expansion units) handle up to 144TB, I would be recommending any organisation be purchasing it as a backup solution alone – because while technically the backup is “offsite” (i.e., separate from the Microsoft cloud), it’s not exactly infallible given it’s a single physical storage environment.

However, for small organisations that want to do away with on-premises server infrastructure as they move to the cloud and have some form of backup of some of their content for peace of mind, this type of NAS is an ideal fit.

What Apple employee unrest over remote work says about the future of the office – Vox.com 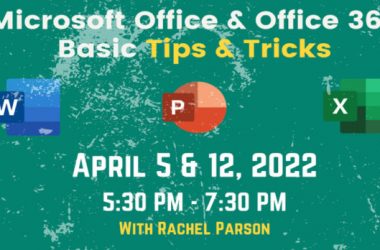 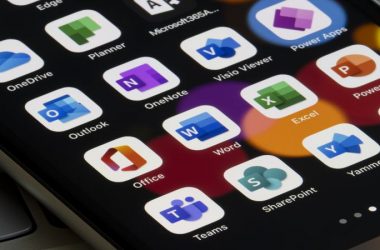 Two Mountains, a South African group of companies operating in both the financial and burial services industries since…